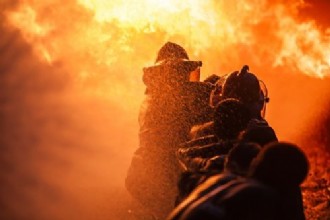 The Firefighter Five Foundation was founded in 2013 by Steven Bender. The purpose of the Foundation is to provide assistance to fellow emergency responders in becoming mentally and physically fit through activities and to promote well being through causes.
How did the Foundation Start

Mr. Bender is a 31 year volunteer firefighter with a passion for being outdoors and running. Mr. Bender has completed dozens of races in the past several years ranging from a 5k up through the 50k ultra marathons with a goal of running a full marathon in gear in each of the 50 states. (www.343.run)

" Late in 2010 I looked at a picture of myself from a state fireman’s convention. I could not believe what I was seeing in this picture. Where has the once in shape, active guy I remember have gone? Just like many others the daily routine and feeling of just not having time to take care of myself had set in and I became less physically fit and ballooned to a weight of 235 pounds. I knew it was time for me to take action for myself. As first responders we always think of helping others first, it’s just what we do. How can we help others when we can’t take care of ourselves? I set out determined to lose weight and become better physically fit. I bought a pair of cheap sneakers and started to run. The first day out I could not run more than a mile. It was very frustrating but I kept on pushing. Mile after mile, month after month I started to run farther and faster. There was no one telling me the little tricks to get better, no one with the encouragement of pushing harder, but I did it. Three years and many marathons and ultra-marathons later, down 60 pounds to a weight of 175, I am still pushing harder and farther. During long runs, sometimes reaching over six hours in length, you have plenty of time to think and clear your mind. I thought, how can I motivate others to become more active, how can I get others to overcome the obstacles they may have. Many ideas went through my mind. I thought that if a community based forum existed where others can motivate each other, that would be a great start. Sure there are plenty of running clubs and organizations like that already but we are first responders, we have a strange sense of humor and brotherhood that most people just don’t understand. Now to take that idea one step farther. We spends hundreds of hours volunteering our time helping others in need, perhaps corporations will recognize our sacrifices and pay it forward for us. This is where the idea of this Foundation is born. Donations from corporations and private parties can be collected to help offset some of the expenses of running the 5k’s, marathons, competitions or anything else that keeps us fit. These donations in combination with the moral support that we give for each other is a winning situation. ”

Corporation
The Firefighter Five Foundation is an IRS 501(C)3 nonprofit corporation from Delaware, United States.
Run2Respond thanks our amazing sponsors